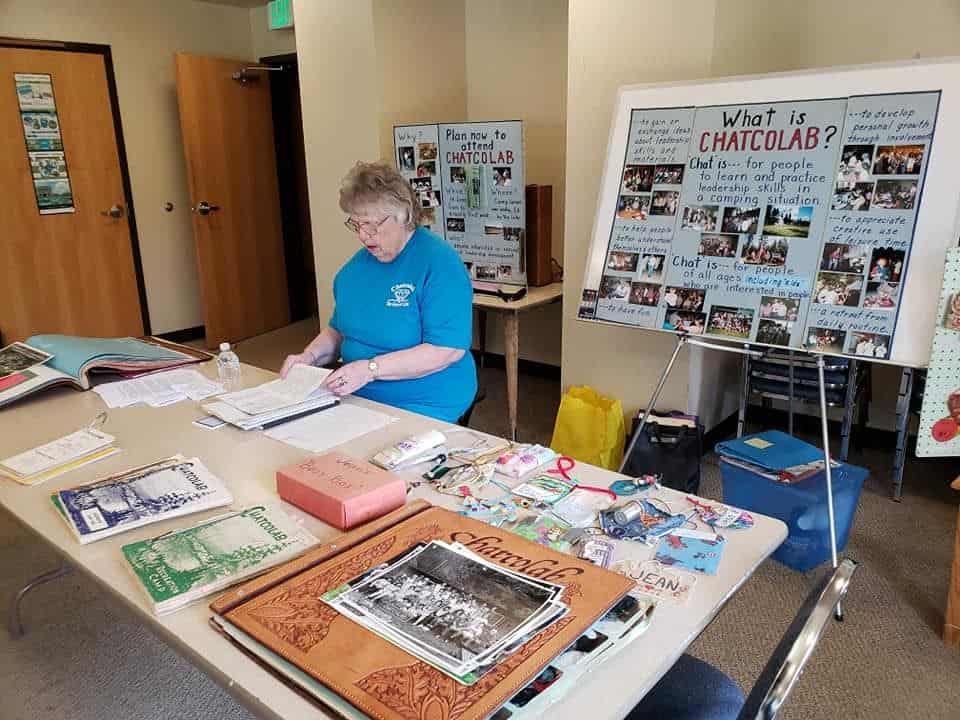 Everything you've ever wanted to know about Chatcolab

In 2016 the University of Idaho Archives created a database of Chatcolab Notebooks that can be reviewed HERE.

Chatcolab had its beginning in 1949 as a result of Don Clayton having attended the Black Hills Lab and returned home enthused about what he experienced. There were a few people from southern Idaho who had attended Black Hills Lab and Don had just moved from Havre, Montana, to Moscow, Idaho.

His move was the incentive to try to start a new lab in the northwest. Black hills labbers contributed $58 toward organizational expenses and a committee of 6 people was formed. A subcommittee made up of people from Oregon, Washington, and Idaho who were interested in people and recreation were also drafted to complete the new organizational committee. The winter meeting help with Al and Louise Richardson at Corvallis, Montana, blew the $58, but enthusiasm was greater to get this lab off the ground.

Resource people from the area were secured and an old CCC camp was chosen as the site. On good authority by an old-timer, the best weather in May was always the second week and May 11-18, 1949 was the first lab with 87 people attending.

The first campsite was built as a CCC camp in the 1930s. During WWII, it was used as a convalescent camp for pilots stationed in Spokane, WA. When Chatcolab was first held there, the camp was in a sad state of disrepair. Don brought students from Moscow and many others in the area contributed much time, materials, and money to repair the camp so it could be used again. A wall was built between the kitchen and dining area and many colorful pictures were painted on the walls to enhance the building. The trays, carts, and many other things were brought from Farragut Naval Training Station on Lake Pend’Oreille.

Chatcolab was held in the same location – Heyburn State Park – on Lake Chacolet from 1949 to 1975. Thus, the Northwest Leadership Laboratory became officially known as Chatcolab, deriving the name from the name of the lake and the fact that this is a laboratory situation.

In 1955, a group of California people came to Chatcolab, became enthused with the idea, and over a three year period started the Redwood Lab. In 1957, on a second try, a section of the Chatcolab ceremonial candle was presented to Mary Regan and Emily Ronesse who returned to California to start the first Redwood Lab in April 1958 near San Francisco. They in turn presented Chatcolab with a piece of gold bearing quartz in 1960.

Since the center section of our original candle became the base of the Redwood candle, in 1958 the remaining part of it was melted down and molded into a new large candle and four small ones to represent the “Spirit of Chatcolab” – knowledge, philosophy, ideas, humor, and sharing. These candles were later formed into one large piece by Leila Steckelberg and is still being used.

The possibilities of becoming an incorporated group were discussed at the October 1968 board meeting in Moscow, Idaho, with the board accepting the proposal. Vern Burlison was instrumental in getting the corporate matters completed so on May 15, 1969, during Chatcolab, the Articles of Incorporation were notarized at St. Maries, Idaho. In 1989, the non-profit status was received from the IRS through the efforts of Betty Schuld.

As can happen in any organization, the plans and expectations were becoming too caught up in the past and “getting in a rut” … The “family groups” were getting too strong and activities were based on duties rather than people. Don Clayton, one of the original planners of Chatcolab, now of Wisconsin, attended the October 1969 planning board meeting in Moscow, Idaho, to help re-evaluate the goals of Chatcolab.

He reminded us that we learn through sharing, not merely in getting, and labbers need to feel the warmth and love of the group to be ready to learn and experience leadership. Plans were made to create an atmosphere where labbers are more willing to try things on their own. During the 1970 lab, in Chatcolab’s 21st year, the lab program was people-centered and activities were filled to suit needs, rather than an activity program first, filled in by people. This presented a challenge for labbers to use their ideas in self-discovery.

Chatcolab 1972 saw the introduction of C.H.A.T. (College of Hidden Arts and Talents) classes allowing every labber an opportunity to give more of him/her self by sharing some ability.

We appreciate your support!

CHATCOLAB Northwest Leadership Laboratory is an equal-opportunity, affirmative-action, non-profit educational organization begun in 1948 to offer leadership development through recreation. Youth and adults come together to build leadership skills. The lab meets annually at a residential camp and offers learning through general leadership sessions and interactive workshops.